The MPCUA is seeking to recruit cricket umpires for the upcoming season. Click here to find out more about how to become a fully qualified MPCA cricket umpire or email: MPCUA@umpire.cricketvictoria.com.au 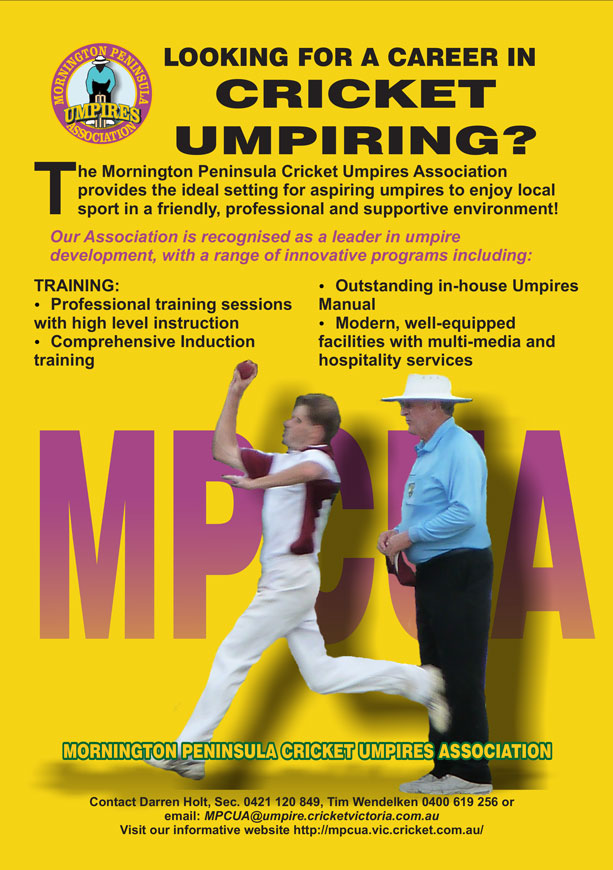 The MPCA congratulations the winners of the 2015/16 Best & Fairest. A list of the vote count is below.

The Rosebud Cricket Club is seeking expressions of interest for the position of 1st X1 Captain for the 2016/17 season. Having just won the Sub District 1sts Premiership and being promoted into the District competition, we require the services of a strong leader who will work in with our Senior Coach Jason Mathers to take this promising group of cricketers further. The Club has 5 Senior Sides and this season all of them made the f......

Balnarring Cricket Club is seeking a Coach or Captain-Coach for the 2016/17 season and beyond. The successful candidate will be driven to achieve on field success, be a strong leader and possess good communication skills. You will be able to plan and lead training sessions, assist with junior development, improve and assist senior cricketers, build an enjoyable practise and playing environment, and develop a positive culture that will lead to......

Boneo Cricket Club is currently seeking applications for a Senior Club Coach (playing or non-playing) to coach the club in the MPCA District completion for the 2016/17 season. The club is looking for the successful applicant to continue to develop a positive and professional culture within a young vib......

The Carrum Downs Cricket Club is a Sub-District club in the MPCA. The Club fields 5 senior teams and 7 junior teams and are currently seeking the skills and services of a coach/captain coach for the 2016/17 season and beyond. The roles and responsibilities include but not limited to: - Prepare a comprehensive coaching and game plan for all senior grades. - Prepare a plan for pre-season training and practice matches. - Oversee the prepar......

The Hastings Cricket Club are seeking expressions of interest for the position of Captain/Coach for season 2016/17 and beyond. We are a small, proud family club with 138 years of history. We currently field 4 senior and 4 junior teams in the Sub District division of the MPCA competition.We have a talented, exciting young group of cricketers with our first elevens average age being 23. We also have a talent rich group of juniors, with at least ......

The Baxter Cricket Club is seeking a non playing Club Coach for the 2016/17 season and beyond. Baxter is a family oriented club with some of the most modern high class facilities on the peninsula providing a level of play to suit all cricket enthusiasts from social to experienced & competitive cricketers. The club fields 5 senior and 6 junior teams and has won 3 of the past 7 provincial first eleven premierships. The club wishes to mainta......

The MPCA Provincial Grand Final heads back to MPCA Headquarters this season with Crib Point CC to play Peninsula Old Boys CC. The MPCA is hosting the event and facilities will include a stall selling food and soft drink, a coffee van and portable toilets for the public as well as separate facilities for the teams. There will be no alcohol sold at the ground.  ......