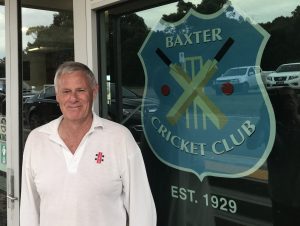 v Heatherhill on Sunday 21 January 2018 on the Wayne Landry Oval that was officially renamed in his honour in 2014.

Wayne is a club stalwart who commenced playing in 1965. He has played all of his senior games with Baxter featuring in 15 Grand Finals from first XI to sixth XI, including six Premierships. He has scored more than 9000 runs and taken over 500 wickets.

In addition to his on field performances Wayne has been a great coach and mentor to many past and present players as well as is significant off field contributions and positions held including:

He has also been instrumental in major club initiatives including:

In his spare time Wayne can still be found down the rooms cleaning, vacuuming, mopping and doing other odd jobs.