Next trial for 2015 VMCU Carnival will be held on Saturday 13th September at Frankston YCW Ground, Frank St, Frankston. END_OF_DOCUMENT_TOKEN_TO_BE_REPLACED

The second Under 16 try outs will be held on Saturday September 6th at Long Island CC nets.Times are North Squad 10-12 and South Squad 12-2. Squads are below. If anyone is unable to attend please contact Ricky Ramsdale or Robert Skelly.
2015 VMCU U16 Squad

Steve Chapman Cricket Coaching is hosting 4 pre-season Holiday Coaching Camps this school holiday. The camps are a great way to set up young cricketers for the season with a comprehensive overview of all things cricket. END_OF_DOCUMENT_TOKEN_TO_BE_REPLACED

Clubs can now order both cricket balls and scorebooks online from the MPCA website using the link below or by selecting “Cricket Ball Order” from the “Information” menu on the MPCA home page. Once you have submitted your order you will receive email confirmation that you order has been received by the MPCA office, who will then contact you to arrange a pickup date & time. ORDER YOUR BOOKS & BALLS HERE

The Mornington Peninsula Cricket Umpires Association (MPCUA) is seeking new umpires for the 2014-15 season. Umpiring is a great way for former players to stay involved in the game. Once you become a member of the panel, training and support will be offered in order to gain accreditation and increase your umpiring knowledge and skills. Further details are available at the MPCUA website at http://mpcua.vic.cricket.com.au 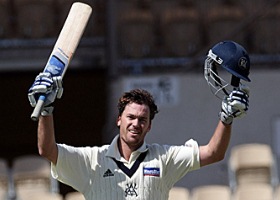 Members of the 2012-13 VCCL team were acknowledged at a presentation at the league’s annual general meeting in Melbourne on Sunday 3rd August.

Eight regional teams of the year were originally forwarded to the VCCL to be considered for inclusion in the Victorian Country Cricket League team.

The process was adopted by the VCCL as a way of promoting country cricket and its better performers. It is also seen as a strategy to encourage VCCL selectors to become more familiar with the talented cricketers in all associations in their regions, not just in the major competitions.

“It is purely a statistical exercise. The VCCL team of the year is decided on the basis of total runs and wickets, the best averages and the most wicket-keeping dismissals. All other variables are discounted,” VCCL chairman of selectors Kelvin White said.

“By asking all regions to compile their best teams, we have had conversations with people right across country Victoria about the merits of their best performers for the season,” he said.
“Carrying out this exercise shows players that, statistically, they do stack up against one another. We all understand there are different levels of competition but you can only bat and bowl against the players on the other team. Selecting a statistical VCCL team of the year gives us a starting point for working out our best players, and sorting potential Victorian country squad members for the Australian national championships.”

White admitted the task to select the VCCL team was a fascinating exercise. “So many good players, so many impressive stats,” he said.

The team contains two opening batsmen, four top and middle order batsmen, an all-rounder, a wicketkeeper and four bowlers, at least one of whom has to be a spinner.

U16 VMCU SQUAD
Training session will be held on the 23rd of August at Mornington indoor. South 10am  till 12noon  &  North 12noon till 2pm .  Details of squads are below.
Players to bring drink, gear & $5 to cover costs, also please wear white cricket shirt.
Anyone unavailable please contact Rob Parker on 0421 397 017