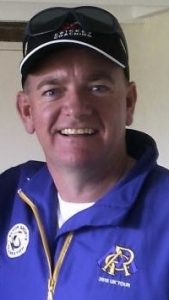 To all member clubs,
On behalf of the MPCA board, we are pleased to announce the appointment of JASON NAGEL to the position of MPCA General Manager/Secretary.
Jason has been associated in various roles as a player, coach and administrator within Mornington Peninsula Cricket for some 30+ years.
He brings to this role not only his vast cricket background and knowledge, but skills such as planning, strong communication, cost management, procedural and document control, that he has developed in his working career as a project manager with a number of engineering companies.
Jason will formally commence in this role as of next Monday (26th July) working alongside Ian Benson for a period of time to ensure that a successful handover occurs, at what is currently a busy time leading into the coming cricket season.
Please join the MPCA board in welcoming Jason to his new role.
We would also like to take this opportunity to formally thank Ian Benson for his work over the last five years, futher correspondence on this matter will follow later. 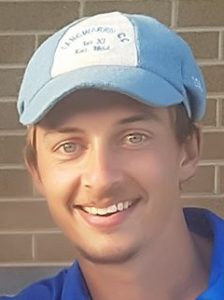 The MPCA Board wishes to pass on its Congratulations to Matthew Prosser from  Langwarrin on his selection in the VCCL 2020/21 Team of the Year.

We also congratulate all those selected in this team.

The Victorian Country Cricket League has selected its Team of the Year for season 2020-21. Eight regional cricket teams of the year were originally forwarded to the VCCL and all 96 players were considered for inclusion in the VCCL team.

The selection process includes the application of criteria based on player performances using statistics from home and away matches of each country cricket association’s top grade or division. The team contains two opening batsmen, four top and middle order batsmen, an all-rounder, a wicketkeeper and four bowlers, at least one of whom has to be a spinner.

“The VCCL team of the year is decided on the basis of total runs and wickets, the best averages and the most wicket-keeping dismissals. All other variables are discounted,” VCCL chairman of selectors Rob McIntyre said.

“This season’s nominations have again seen some outstanding performances in country cricket associations across this State,” he said. “With most competitions playing fixtures of one-day matches for the entire season due to the pandemic, the top batting performances came from those who batted in the first four positions for their teams. The top bowlers were still able to take wickets numbering in the high 30’s and early 40’s even though they were restricted to the number of overs they could bowl in each match in the one-day format.”

Sam Miller has been named captain after amassing over 900 runs in the Ballarat Cricket Association. Sam returned to Ballarat last season after stints in Canberra and South Australia where he played Sheffield Shield and one-day matches.

Dale Kerr is vice-captain after another outstanding season with the ball. He has been a consistently high wicket-taker in the Bellarine Peninsula competition for the past seven seasons.

The VCCL Team of the Year process provides Vic Country selectors with an opportunity to recognise the better players across the State when identifying potential Victorian country squad members for the Australian Country Cricket Championships to be held in January 2022.

Members of the 2020-21 VCCL team will be acknowledged with a plaque and cap presentation at the league’s annual general meeting in early August. 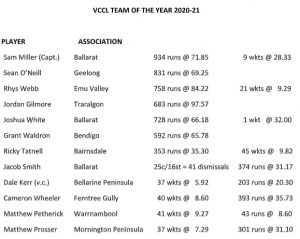 It is with great sadness that the MPCA and the MPCUA advise that the wife of long serving Umpire Graeme Robinson, Heather, tragically died in a car accident on Saturday 19th June in  Mornington.Graeme’s son, Michael was a passenger in the car with his mother and he suffered serious injuries. He has now been released from ICU today. The MPCA and MPCUA extend […]

BECOME A CRICKET UMPIRE IT’S YOUR CALL The Mornington Peninsula Cricket Umpires Association (MPCUA) is seeking to recruit both newcomers and experienced umpires to its ranks for the 2021-22 season and beyond – both female and male applicants are most welcome. Are you an ex-player who hasn’t been involved in the game for a while – maybe you are a club support […]